Please use this link when booking your reservations for the Green Bay WI competition.

The Kalahari room blocks are now open to make new reservations! Please use the following link. Any existing reservations can still be changed.

Due to the ever changing nature of information pertaining to COVID-19, we have some new updates to share. With each city/state opening up we are in a holding pattern to see the outcome. States are implementing guidelines that will need to be followed once convention centers and schools are allowed to open. Due to the unknown reschedule dates will not be updated until we can confirm that the hosting venue will be allowed to proceed.

We hope to have more information in the near future. Thank you for your patience and understanding during this unprecedented time.

The following locations will be rescheduled;

We are working with each of the venues to confirm a later date and we will share that information when it becomes available. As things move forward we will be updating the studios via email, as well as posting to the news link on our website and social media platforms.

New Starz
Seniors are now eligible to compete at the New Starz level. Dancers should have less than 2 years competition experience and 2 hours or less dance classes per week.

Standout Dancer
We are excited to announce that the top 2 highest scoring Rising Starz Soloist from each studio are now eligible to be selected as Standout Dancers.

Starz Dance Competition asks that you always enter dances at the appropriate level (NS,RS,S) with the highest level of integrity, and thus allowing for a fair competition. If it comes to our attention that a dancer or a routine is purposefully competing down a level, we reserve the right to take suitable action, i.e., adjudicated score, ineligible for High Point, correcting level (NS to RS, RS to S), including disqualification.

The Grand National Finals will begin on Sunday June 16th.

*If a dancer from the same studio qualifies in both a solo and a duo/trio the studio will be allowed time to accommodate for a costume change (not to exceed 10 mins).

Production and Line Shootout. The Three highest scoring production routines at both the Starz & Rising Starz level will re-compete to be the Grand National Production Champions. The three highest scoring line routines at the Starz & Rising Starz levels will also re-compete and become the Grand National Line Champions!

Dancers winning the high points in the categories of small group, large group, lines and production are encouraged to stay until they are informed of the qualifying results for Sunday’s Grand Nationals.

However, winning 1st over-all high point does not necessarily mean your routine will be in the finals. It could be bumped out by another routine in a different category of the same age. For example: If Studio A has a mini small group that wins 1st place high-point with a score of 292.15 but later the same studio has a mini large group that does not win a highpoint but has a score that is higher, the mini large group from Studio A bumps the small group from Studio A even though the small group was ranked higher in its category. Only 4 dances from the Starz level and 4 from the Rising Starz level in the mini division are chosen for the Grand National Groups regardless if they are a small group, large group. This is the same for pre-teen, teen, and seniors.

Studios that have more than one routine that qualifies in each age group for the Grand National Groups may choose which routine will advance(highest qualifying is always recommended).

These events are a wonderful way for studios to support one another and for dancers to cheer each other on!

On behalf of all of us at Starz we want to wish all the dancers the best of luck and hope this year’s event will be one to always remember.

Good Luck to you and See you in the Wisc Dells!!

Compete for the Title! Bring your best solos to win Miss/Mr Starz! 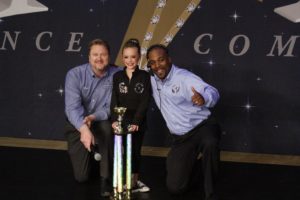 Winners will be awarded an exclusive title jacket
with special recognition on our Facebook page and their photos will be featured in our nationals program.

Dancers must register at least two Starz level solos to be eligible at regional competitions.
Find Out More

Starz Dance Competition has moved locations! So please mail all materials now to: